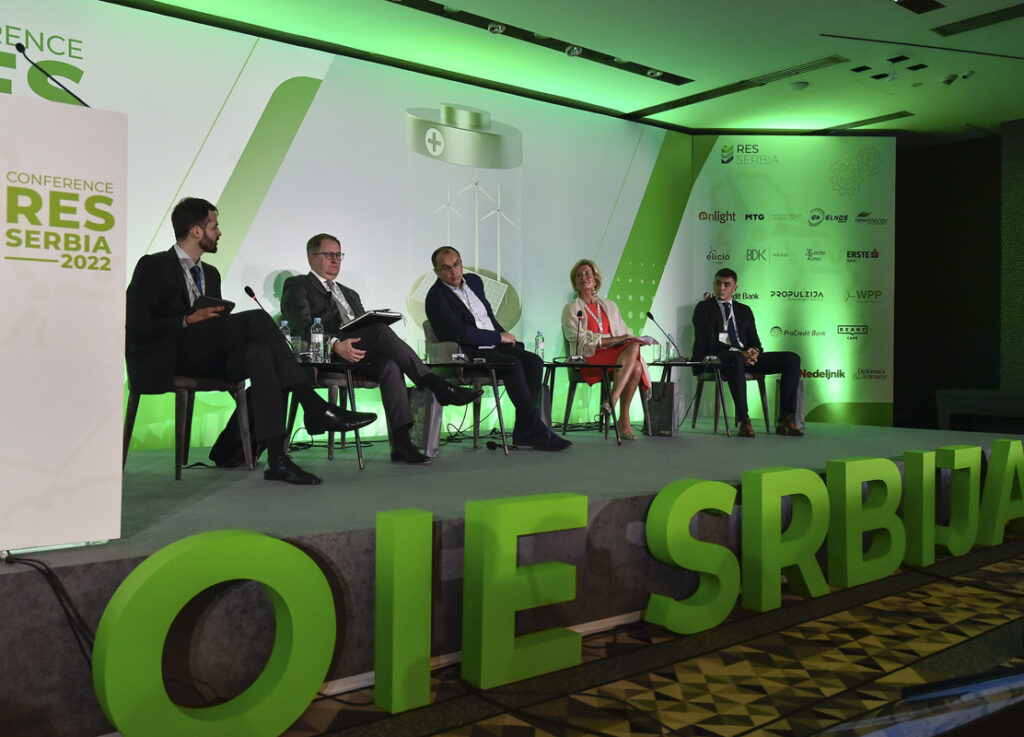 One of the cheapest energies in the world comes from RES; the green transition has political support; The Serbian market has great potential, but operators must expand capacities in order to connect an increased number of RES projects to the transmission system – these are the conclusions of the second panel held at the RES Serbia 2022 conference.

On the panel “Market challenges, regulatory obstacles and investment environment as key elements for the realization of wind farms and other RES projects (words of investors and equipment manufacturers)” participated: general director of the company Nordex for the Mediterranean Anne-Catherine de Tourtier, director of the European energy team EBRD Grzegorz Zielinski, Senior Manager for Development and Investments at Masdar Ubaldo Yanez Diaz and Director of Business Development for Europe at Enlight Renewable Energy Marko Lipošćak. The introductory presentation was held by Ivan Komušanac, advisor for electrification at WindEurope, who also moderated the panel.

General Director of Nordex for the Mediterranean, Anne-Catherine de Tourtier, reminded that one of the cheapest energies in the world comes from RES and pointed out that Nordex wants to support the development of wind energy in Serbia.

– Serbia makes it possible to install the most modern technology, which is a great advantage. In order for Europe to overcome the major energy crisis it is in, we must have energy independence at the level of the continent. We need to have all the production in Europe – stressed de Tourtier.

The Director of the EBRD’s European Energy Team Grzegorz Zielinski expressed satisfaction that the OIE Serbia conference this year gathered even more participants than the previous one, which, he said, is another confirmation of the importance of the topic of renewable energy sources. He believes that, despite the expected increase in wind turbine prices, the renewable energy project will remain competitive because it is still the cheapest and has political support in Europe.

– Previously, politicians thought that RES was science fiction, today it is not, and not so much because it is about green energy, but local energy. And that’s why we’re not going to talk about megawatts from RES, but gigawatts – concluded representative Zielinski.

Ubaldo Yanez Diaz, the senior investment manager of Masdar, pointed out that Serbia is a key market for them in Europe.

– We have been present in the field in Serbia since 2018th through Masdar Taaleri Generation (MTG). For us, Serbia is a key market in Europe, with great potential for growth. We are also open to the development of solar capacities – emphasized Diaz and added that obtaining permits for RES projects is a challenge in Serbia and Europe: – We appreciate the reforms in the energy sector, but we expect more regulations that will improve obtaining permits.

The director of business development for Europe at the company Enlight Renewable Energy, Marko Lipošćak, assessed that the green transition has political support, and that in the future in Serbia he expects more monitoring by the domestic legislation, which will mean longer processes.

– But that is understandable because it is about complex projects. In this sense, Serbia is not an exception, neither in the region nor in Europe. What must be taken into account is the issue of connection to the transmission system. Operators must expand their capacities in order to connect us to the transmission system, and for that they need the same permits as we do – warned Lipošćak.