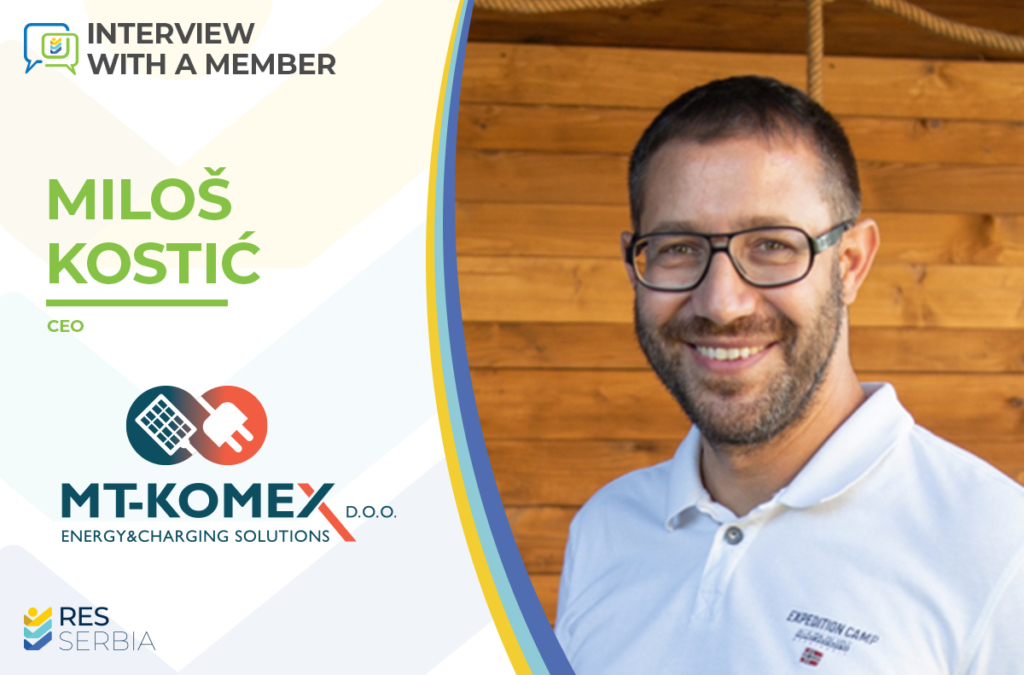 Miloš Kostić, director of MT-Komex, is a regular member of the Assembly of the Association Renewable Energy Sources of Serbia. Our interlocutor is also the founder of this company, which has been operating for 29 years and represents a leader in the design and construction of solar power plants, but also Charge & GO, which in cooperation with Virta from Finland developed the application and became the first regional platform for finding, charging and managing for charging fully electric and plug-in hybrid vehicles.

MT-Komex and you personally are a leader in the field of solar energy in Serbia. How many projects have you done and put into operation so far?

In 2010, MT-Komex focused its business on renewable energy sources. Among the first projects we did was Solaris energy, the largest solar power plant on land in Serbia, with a capacity of 2 MW. After that, MT-Komex dedicated its attention and knowledge to solar energy and in the following period invested in the company’s expert team, both from the engineering and installation side. The MT-Komex team achieves maximum quality of service and achieves exceptional results in Serbia through constant training. From the day of its formation until today, we have done over 20 MW of projects, and the fact that this year we have already contracted over 30 MW testifies to how much the situation on the market has changed.

In the past 12 years, solar energy has been marginalized in the Western Balkans and solar photovoltaic panel technology has been very expensive, only recently has the production price of solar energy been equated with the market price, so there is no longer a need for a co-financing mechanism or a feed-in tariff mechanism. Viewed from the standpoint of the Republic of Serbia, it was a good decision that the state did not introduce large quotas or allow the construction of a large number of solar power plants or other types of ,,green’’ energy because it would burden the budget of both the state and citizens. In fact, the adoption of the RES Law, which preceded the current energy crisis, was timely. Now, with the change of the legal framework, it has been possible to build solar power plants according to different principles – either a ,,prosumer’’ or just a producer of electricity.

There is a public ,,Register of Privileged Electricity Producers’’ maintained by the Ministry of Energy, which includes all those who have a preferential price of electricity, and there is also a ,,Register of issued energy permits’’ for all facilities to be built in the near future. The ,,Register of customers-producers’’ has just been formed, because it is a novelty on our market. Recently, EPS enabled the conclusion of a contract on the status of buyer-producer, and all facilities that were built, but not recorded in the registers that were previously formed, will now be recorded through the ,,Register of customers-producers’’ which is practically part of legislation. It is estimated that there are currently about 40 MW of built solar power plants in Serbia, most of which are power plants located on roof surfaces.

Your Solaris Energy power plant in Velesnica near Kladovo has been in the incentive system for 8 years. It is also one of the largest solar power plants in Serbia. Has the investment paid off? What will you do after the 12-year incentive period expires?

The decision on the construction of the largest solar park in Serbia ,,Solaris Energy’’ was made by our partners and me after we started to monitor the change in the investment value of the construction of the solar power plant in 2010. We managed to get a preferential price of electricity for both parks – Solaris 1 and Solaris 2, which enabled us to return the investment in a period of 7-8 years. The advantage was that we worked on the project in two phases, because the power plants are located in two different cadastral municipalities. After it turned out that the system of the first power plant works as expected, in 2014 we received additional credit funds from ProCredit Bank, which recognized our project as good and allowed us to build another megawatt. After the expiration of the incentive period of 12 years, our company plans to go to the open market.

I would like to add that during 2021 we continued to develop new phases – Solaris 3 and 4, also with a capacity of 1 MW, and construction is planned to begin in the second half of 2022. Finally, at the site in Kladovo we expect to build between 5 and 10 MW .

Are you developing another major project?

Back in 2019, at the location in Lapovo, we started the development of a project called DeLAsol of 10 MW of active connection power or 12 MW of installed power of solar panels, 655 bifacial panels. The urban project has been accepted, and we recently submitted a request for location conditions.

What is the solar potential of Serbia? How many hours of sunshine do we have per year? What are the advantages and disadvantages of investing in solar energy in Serbia?

Serbia’s solar potential is 30 to 40 percent higher than the potential of Northern Europe, which means that if we take into account Germany, where 100.000 megawatts were built, our country has 30 to 40 percent more solar potential. It is estimated that there are 1.400 nominal hours of solar power plant operation at nominal capacity, and the difference in the number of sunny hours in Serbia in relation to the position of the solar power plant is between 1.850 in the north and 2.250 sunny hours per year in the south. Our solar potential is underused, there is a lot of room for progress and development.

The expected production in Serbia is between 1.200 – 1.400 kWh per kWp of installed solar power plant. By simple calculation, that is, if you are building a 1MW solar power plant, you can expect an average of about 1.300 MWh per year.

Recently, EPS published contract models that allow prosumers to enter into contracts? Has any of your clients entered into such a contract?

Our company has gained the trust of a large number of industrial facilities and individuals, given that MT-Komex really has the most experience in building solar power plants. Last year, we delivered and installed equipment for more than 9 MW of solar power plants. And as I mentioned, this year we gained trust and signed contracts for the design, construction and installation of equipment and commissioning for more than 30 MW.

Several of our clients have already entered into contracts with EPS or another open market supplier.

How does the customer-producer system work?

Last year, the Law on Renewable Energy Sources was adopted, which enabled individuals and legal entities to become ,,customers-producers’’ (prosumers) under certain conditions and to install solar power plants on the roofs of their buildings. EPS has published detailed instructions on how economic entities, but also individual households can acquire the status of ,,customers-producers’’.

First of all, it is necessary to build a solar power plant, whose installed power must not be higher than the existing approved power of the connection. Then, the metering point is adjusted and a contract is concluded with EPS on the complete supply of electricity with net metering, net billing, depending on who the user is – a household or a legal entity.

The user connects his own facility for the production of electricity to his internal installations, and acquires the status of ,,customer-producer’’ by entering in the ,,Register of customers-producers’’ of the distribution system operator after fulfilling all the necessary conditions. The customer-producer remains connected to the electricity grid and while using the produced electricity for his own consumption, he delivers the surplus to the electricity grid. At the end of the month, the difference is shown, and if more electricity is produced than consumed, that net amount is transferred to the next month. The receivables settlement period ends on April 1 of the following year.

You are also installing chargers for electric vehicles? How many chargers are there in Serbia, and how many electric and hybrid vehicles? Is charging free everywhere or does the billing system work somewhere?

We at MT-KOMEX realized back in 2014, when we finished the construction of solar power plants, that the future of RES placement should be in the electromobility sector, so we started researching and learning about electric chargers and electric vehicles. In 2017, we became partners of Schneider Electric and ABB, and two years later EnelX and Siemens, where our engineers and installers underwent training on the installation, commissioning and maintenance of chargers from these renowned manufacturers. In the same year, 2019, we decided to further invest funds and dedicate ourselves to developing the Charge & GO application in cooperation with Virta from Finland. Charge & GO has become the first regional platform to find, manage and charge for the use of charging points for fully electric and plug-in hybrid vehicles. In August 2021, we formed a special legal entity with the same name and transferred the entire business to it in order to give additional seriousness to this activity and increase the number of filling places through our own investments in infrastructure development.