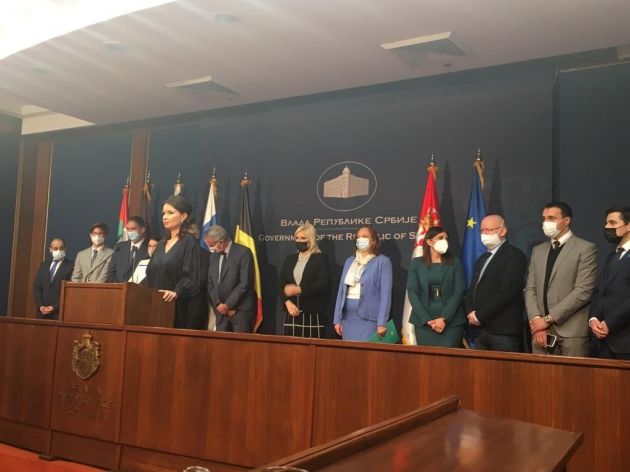 On Wednesday, April 21, Deputy Prime Minister and Minister of Mining and Energy, Zorana Mihajlovic, signed with Danijela Isailovic, manager of the association “Renewable Energy Sources”, the Agreement on Cooperation between the Ministry and the association and said that this agreement sent a clear message that Serbia would work more on energy production from RES, because the vision of Serbia, she pointed out, is to have at least 40% of the energy produced from renewable sources by 2040.

Mihajlovic reminded that, the night before, the parliament had adopted a set of laws on mining and energy, which represent the basis for further development and energy transition of Serbia.

– It is a set of important, basic and modern laws that will enable us to develop faster on the path of green transition. When we started talking about that topic a couple of months ago, we knew it wasn’t going to be easy because energy had been sleeping for years. This agreement also means an invitation to investors to come and invest in Serbia, because there is a lot of potential, and we have made all procedures efficient and fast and to get good prices and new gas, biomass, wind and solar power plants through competition. So far, the most has been invested in wind farms and the most installed megawatts are from them, but there is no reason not to get more energy from solar power plants, for example – she said.

Danijela Isailovic emphasized that the adoption of the Law on Renewable Energy Sources, the first Serbian law that defines green energy, was great news for all investors.

– Thanks also to the EBRD for its support in founding the association. Our goal is to improve the investment environment and business climate in Serbia. We are glad to share values and goals with the Government of Serbia and the Ministry, because we want more energy produced from RES. We will work together on the promotion of green energy and educating citizens about the importance of renewable sources – said Isailovic.

Zsuzsanna Hargitai, EBRD Director for the Western Balkans, said that that spring, Serbia had changed its speed by adopting a package of laws in the field of mining and energy, which had made a huge step forward, in just two months.

– The good news is that Serbia’s indebtedness in this area will not grow because there are a lot of investors ready to come and invest in RES. We are forcing them to compete and offer the best prices and conditions in energy production. The first auctions will be related to wind power production. We are here to provide support, both in energy production, and to support investments in networks, so that they would be able to receive energy from RES – she said.

Finnish Ambassador Kimo Lahdevirta said that he was glad that they were one of the founders of this association and that Finland showed great commitment to the further development of RES in Serbia, and that in the future there would be more Finnish companies there, given the attention Serbia gives to RES projects.

Israeli Ambassador Yahel Vilan said that he was proud that Israel was Serbia’s partner in the field of renewable energy sources. He added that Israel invested a lot in RES and that they had also found natural gas in the Mediterranean, and that this was another initiative that could help gas come to Serbia as well.

Belgian Ambassador Koenraad Adam congratulated the signatories of the agreement and added that it was important to have the Government and the private sector working together and that this led to the advancement of a green future and the implementation of European standards and norms towards the development of a green economy.

Ibrahim Aldarmaki, Deputy Ambassador of the UAE, said that the UAE saw an opportunity to invest in the future through renewable energy sources, which are a good way to fight climate change, and that they would continue to help Serbia as a partner on the path to sustainable development and the future.

Christian Schilling, Head of Development Cooperation of the German Embassy, said that the signing of the agreement indicated what could be achieved together and that it was an important step in the implementation of the Green Agenda, to which the Government of Serbia is committed. He added that Germany supported Serbia on its path to the EU, and that it would increase its investments in energy efficiency and renewable energy sources in Serbia, as reported on the website of the Ministry of Energy.