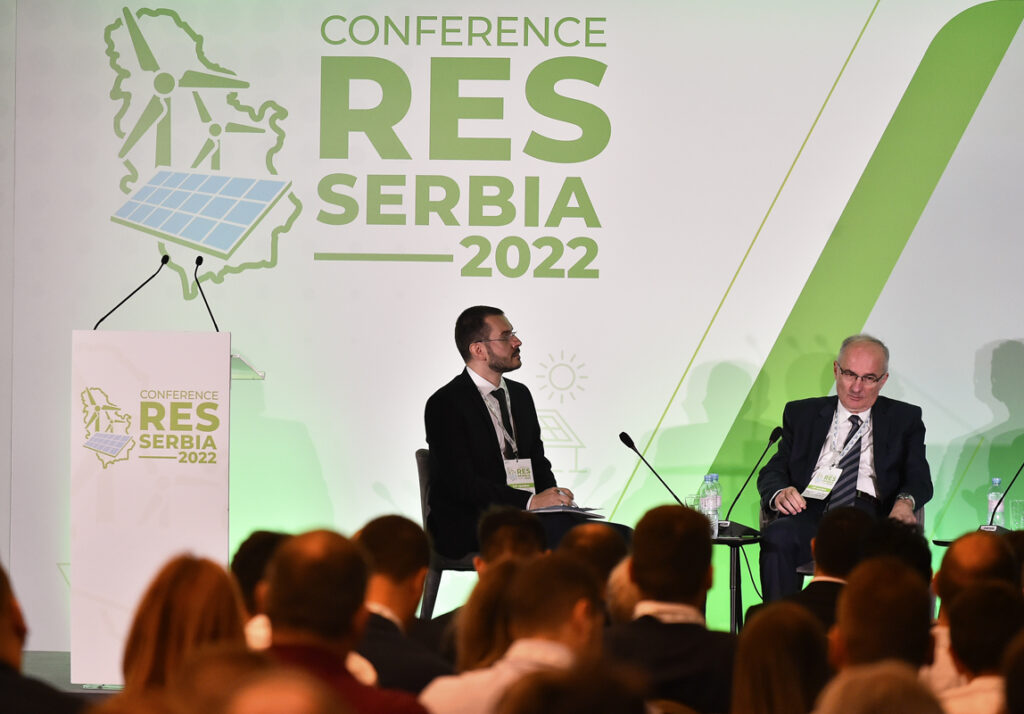 Serbia should have at least 5 GW in RES by 2030; the covid pandemic and the war in Ukraine showed how important it is to be energy independent; EPS will invest in solar power plants after 2025; Europe must work together to increase energy autonomy – these are the conclusions of the first panel held at the RES Serbia 2022 conference, which attracted a lot of public attention.

The panel that was dedicated to the impact of the global security, economic and energy crisis in the development of RES projects was attended by: Deputy Director of the Secretariat of the Energy Community Dirk Buschle, Head of the EIB for the Western Balkans Alessandro Bragonzi, State Secretary of the Ministry of Mining and Energy Jovanka Atanacković and executive Dragan Vlaisavljević, EPS electricity trading director. The panel was moderated by Nenad Jovanović from LDK consultants.

The Deputy Director of the Secretariat of the Energy Community, Dirk Buschle, spoke about the importance of joint auctions in the region.

– It may be an unpopular opinion, but energy independence does not exist. Of course we need to increase resilience and autonomy, but with joint forces and in this sense we should think about joint auctions between countries because the regional level is important – concluded Buschle.

Alessandro Bragonzi pointed out that the EIB invested as much as 62 billion euros in energy in the previous five years. He added that their goal is to support the countries of the Western Balkans in the fight against the energy crisis, as well as to harmonize with the measures promoted by the European Union.

State Secretary in the Ministry of Energy and Mining Jovanka Atanacković emphasized that the covid pandemic and the war in Ukraine showed how important it is to be energy independent.

– We should have at least 5 GW in RES by 2030 and we can’t wait any longer. We have to work in parallel on several fields. Our dream is the reversible hydroelectric power plant Đerdap 3 and we know how to do it – said Atanacković.

As one of the most important projects in the area of ​​saving electricity, Atanacković singles out the Institute of Buyers-Producers of Electricity.

– Currently, 3.8 MW of solar capacity has been installed, while 37 MW is in the process of being connected, and this is the result of only 6, 7 months that the consumer institute is being implemented. In the process of transition to RES, the role of citizens is very important – reminds Atanacković.

The executive director for electricity trading of EPS Dragan Vlaisavljević revealed that until 2025, the main focus of EPS is on the revitalization of existing hydroelectric power plants, and after that EPS will invest in solar power plants. He announced that, in addition to the Kostolac wind farm, the construction of two more wind farms with a total of 300 MW is under preparation. EPS is also negotiating with major global wind farm investors on power purchase agreements.

– What is missing is connecting the region. The real increase in the liquidity of the organized market will happen when the entire region enters the connected European market for electricity. Investors who plan to invest hundreds of millions of euros in wind farms and banks that give them loans and who do not believe in the liquidity of the intraday market know this – Vlaisavljević pointed out.