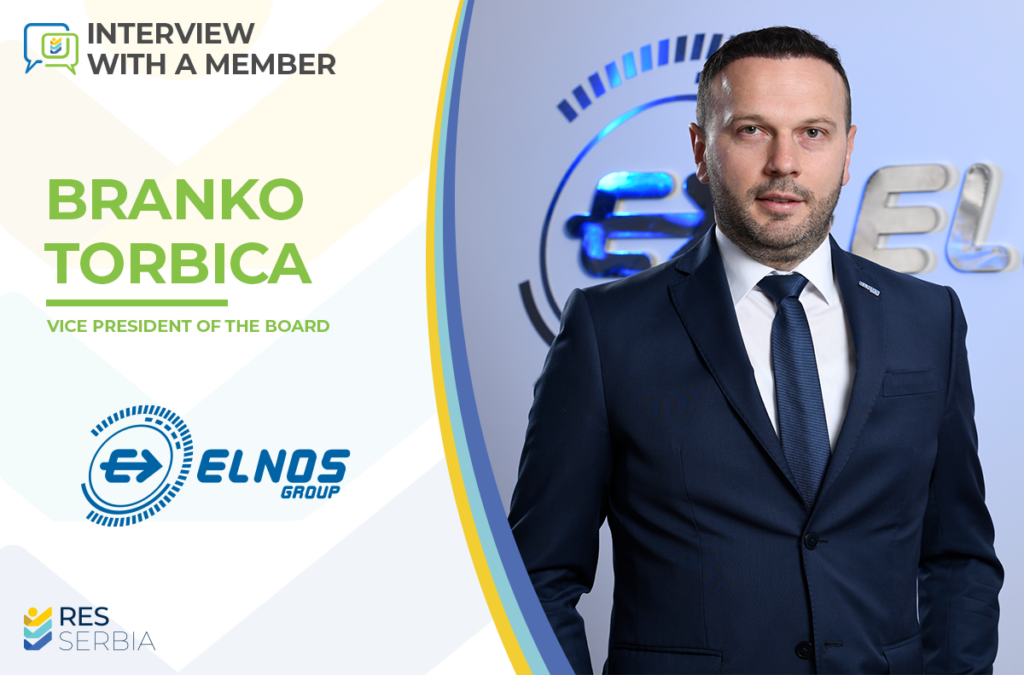 Dreaming big in business and making those dreams come true requires a lot of courage and hard work in real, everyday life. Every success story has a unique formula. However, those coming from modern electrical engineering in recent years are, in their essence, always in connection with renewable energy sources and use of modern technologies.

We discussed development path of Elnos Group, a successful international electrical engineering company which made significant results in the area of sustainable energy sources, with its Vice President, Branko Torbica.

Elnos Group has positioned itself as a regional leader in electrical engineering while, at the same time, the company participates in very interesting and challenging projects in European markets. Where does Elnos Group work today, in which countries and projects?

Today, we are a company that operates on 16 different markets and employs approximately 630 people. Apart from countries of former Yugoslavia, the Group actively works in: Sweden, Iceland, Germany, Norway, Spain, Portugal and the Netherlands. During the last two years, we have made large steps into the markets of Great Britain and Denmark. This year, we also established a new member of our Group – Elnos Poland.

It would be tedious for the readers to talk about all projects we are actively working on. However, I would like to point out that, considering number of ongoing projects, this year is going to be a record year for our Group, since we will be active on more than 130 projects on 11 different markets.

Is it difficult for a local company to be a successful bidder and work on strict and demanding projects in EU countries?

An attitude has long been formed in the public that stepping into foreign markets is a highly complex and risky business move for a local company. Elnos Group as a company continuously proves this attitude wrong. We have opened doors to many markets because we employed highly professional staff and were strict in keeping up with trends in technological development.

We, at Elnos Group, realized that future is what is happening to us at this moment and that we can become an important part of modern trends in electrical engineering. Taking this road requires proactive behaviour, patience, knowledge and a lot of energy. Nevertheless, the results are more than rewarding.

Which RES projects are you most proud of?

A RES project one can never forget is most certainly participation in construction of NordLink- a HDVC European interconnection that enables share and trade of electrical power, obtained exclusively from renewable sources, between power transmission systems of Germany and Norway.

Which RES projects are you currently actively working on?

Our Group is in the process of achieving one of its most important results of the year precisely in within the scope of renewable energy sources where we are performing projects in areas of wind, hydro and solar power.

Regarding wind power, this year, our teams have been engaged on construction of two wind parks in the region. The first one is wind park Bogoslovec (36 MW) in N. Macedonia, which has recently been completed, and the second one is construction of wind park Krivača (103 MW) in Serbia, where works are currently being executed in full swing.

This year, we will add a third green energy HDVC project to our reference list. We will participate in construction of new HDVC interconnection DolWin 5 in Germany, for an offshore wind park that is also a part of the same project.

Concerning hydro power, we are in the phase of intensive preparations for participation in project HPP Dabar and, in relation to solar power, we also made a new step forward through commencement of works on construction of solar power plant Bukovica in Croatia.

It has recently been announced that you are a contractor on wind park Krivača. When can completion of this project be expected?

Works on construction of wind park Krivača (103 MW) are being executed in accordance with time schedule. This is a very dynamic project and requires a high engagement of our company’s resources.

After Čibuk 1 (158 MW), this is the second wind park we are building in Serbia. Our engagement in construction of wind park Krivača is another great opportunity for us to confirm our competence to work in accordance with the highest engineering standards applicable to renewable energy resources.

Does current energy and security crisis has an impact on business operations of your company and, if yes, in which way?

It was not easy for any company to accept the fact that not long “after“ Covid-19 pandemic, it has to adapt its business activities to conditions of a new crisis on a global level. Under current circumstances, it is important to quickly bring adequate decisions and work in a way which will make your company resilient to new and ever changing conditions. Elnos Group is engaging large efforts in implementation of a wide range of activities and processes aimed to establish a unique balance on the Group level. It is thanks to this specific balance that we have managed to stay immune to the crisis so far.

In which way does Elnos Group contribute to implementation of sustainable development principles?

In Elnos Group, sustainable development has always been a goal with no alternative. As a company, we are an active participant in projects that have been changing green map of the region and Europe. We perform projects that imply taking proper care of the resources. Our activities are directed towards providing cutting-edge technologies and equipment to reduce emissions of harmful substances. We use water and energy sources carefully and invest in education and training of our employees to raise awareness on importance of environmental protection.

We are very pleased that this year our efforts in the area were recognized by UNDP which classified us as one of companies with the highest degree of engagement to achieve sustainable development.

RES are our distinguishing characteristic

“Through realizaiton of projects belonging to different scopes of RES, we managed to position ourselves, in a relatively short period of time, as a most competent company in this area. Our teams cooperated with leading world companies and played an important role in green projects. Thus, we significantly contributed to introduction of state-of-the-art technical solutions and innovation in Serbia“, Kukobat pointed out.

Some of the RES projects hold a special place on Elnos Serbia reference list, says Kukobat.

“In domain of hydro power, Elnos Serbia performed a capital project which implied modernization of HPP Zvornik. Thanks to sucessful completion of this project, more than six decades old hydro power plant begun scoring new recods in production. We are also proud of revitalization of seven small hydro power plants in West Serbia. Production plants in these facilities are true perls of electrification in Serbia and we managed to upgrade them entirely by installing new modern equipment“, said Mr. Kukobat.

“However, a crown of our work in RES area is participation in construction of the largest wind park in Balkans, Čibuk 1, with installed power of 158 MW”, he emphasized.

“Through construction of electrical engineering facilities within this plant, we significantly expanded boundaries of our project management capacities at the time, in quantitative terms. As a partner of USA Company General Electric on this project, Elnos Serbia was entrusted with construction of 35/400 kV substation and 400kV double-circuit transmission line”, Mr. Kukobat concluded.

We are currently participating in realization of several RES projects. The most important is construction of WPP Krivača, connection of which to the electrical power network is expected by the end of following year.