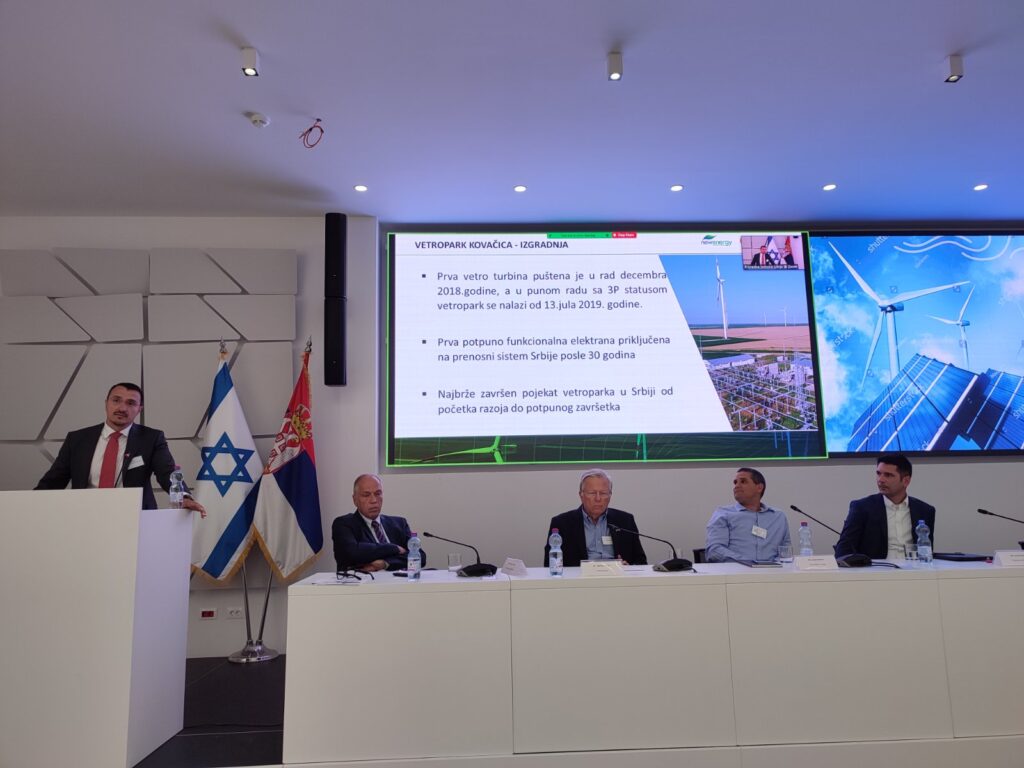 Doors open for Israelis to invest in RES in Serbia

BELGRADE – Yesterday, the Chamber of Commerce and Industry of Serbia hosted the conference ,,Renewable Energy: Potentials and Opportunities for Serbia and Israel’’, at which representatives of the two countries and companies discussed the potential of Israeli investments in the construction of solar and wind power plants in Serbia.

The Minister of Mining and Energy, Zorana Mihajlović, stated that the world has never talked or worked more about increasing the capacity for the production of electricity from renewable energy sources (RES) than today.

She reminded that the investments in that area are increasing, so that last year the number of power plants that use renewable sources increased by 6 percent, and this year it is expected to increase by 8 percent.

,,Serbia has a good legislative framework adopted last year, but as is always the case when major changes are made, there are many issues, and often obstructions. Regardless of that, Serbia has a clear plan that the potentials from RES must grow, which means that by 2040, we need to have a minimum of 40 percent of production capacities for the production of electricity from RES’’,Mihajlović emphasized.

She added that we now produce only 3.5 percent of electricity from solar and wind energy, which puts us at the bottom of the table of RES use in the world.

,,That is why we want to use the potential we had in cooperation with Israel. We have a Memorandum with Israel on the development of RES potential. Israel has done a lot in that area and that is why we can learn a lot. This conference is therefore important, and the state is here to provide support to move the story of RES from conference halls to construction sites and open large solar and wind power plants that will produce electricity here’’, said the minister.

The Ambassador of Israel in Belgrade, Jahel Vilan, assessed that the economic cooperation between Israel and Serbia lags behind the friendship of the two nations and that it is an obligation to change that situation.

,,I think that there is no better area for cooperation than renewable energy sources for creating stronger ties and obtaining investments from Israel through the cooperation of our companies’’, said Villan.

The ambassador said that he believes that due to the potential that exists here, many will come to Serbia, because, he says, we can achieve a lot by cooperating in renewable energies.

“I agree that everything will mostly end at conferences, but I think that the main task is to enable companies from Israel to come and see the potentials of Serbia and finally start working’’, said Vilan.

The president of the Chamber of Commerce and Industry of Serbia, Marko Čadež, stated that today there is no company with large production that is not interested in installing some form of electricity production in its plants, such as solar panels.

The manager of the Association Renewable Energy Sources of Serbia, Danijela Isailović, stated that the conference was organized due to the increased interest of Israeli investors in investing in Serbia.

,,As an Association, we get a lot of questions: are investors welcome, is Serbia a good place for investments and is there still free space? Regardless of the fact that we are developing projects with a capacity of 13 GW from solar and wind, we answer to everyone that good and solvent investors, such as Israelis, are always welcome in Serbia and that there is certainly room for them’’, said Isailović.

She concluded that this event is also an indicator that everyone is aware that RES is the future, but also that all projects are happening at seminars and conferences. ,,Construction is missing and we all hope that disagreements and shortcomings in the regulations will be overcome and that we will quickly move from conference halls to construction sites’’, said Isailović.