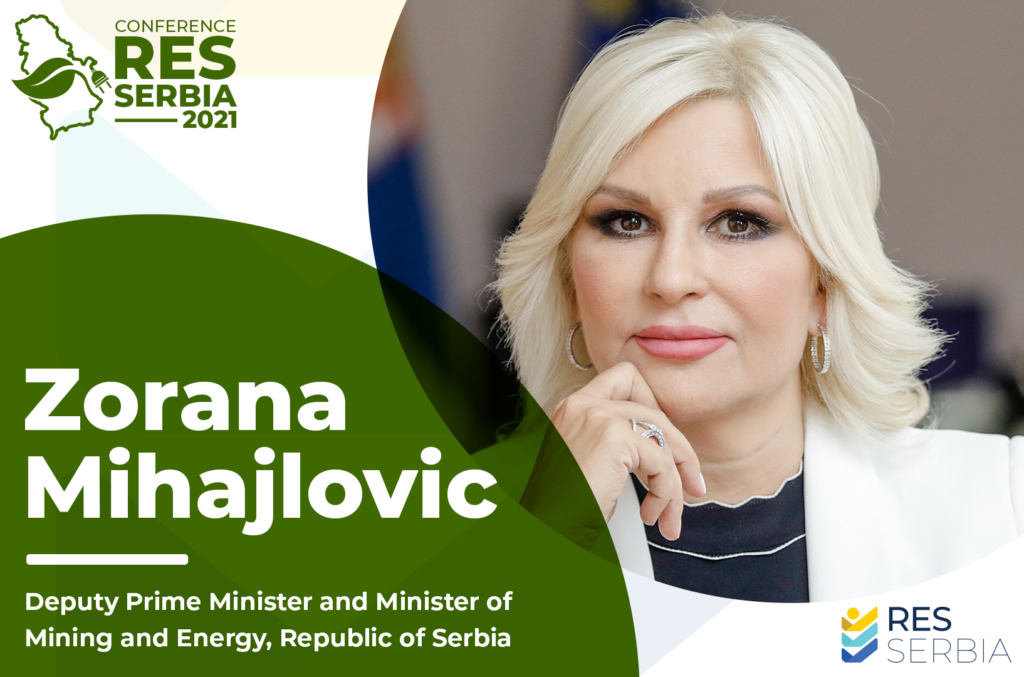 Deputy Prime Minister of Serbia and Minister of Mining and Energy, Prof. PhD. Zorana Mihajlović, will open the RES Serbia 2021 conference, together with Nandita Parshad, Managing Director, Sustainable Infrastructure Group at the European Bank for Reconstruction and Development (EBRD).

Prof. PhD. Zorana Z. Mihajlovic was born in 1970 in Tuzla. She graduated from the Faculty of Economics in Belgrade in 1993, where she received her doctoral degree in 2001 in the field of energy and economics. She was a research associate at the Faculty of Economics, University of Belgrade. She acquired the title of associate professor and vice-rector for science at John Naisbitt University in October 2011 where she was appointed professor in 2016.

She started her professional career in the First High School of Economics (1993-1995), and continued in the Electric Power Industry of Serbia – Elektroistok (1995-2006). From 2004 to 2006, she was an advisor to the Deputy Prime Minister of the Republic of Serbia for energy, Miroljub Labus, and in that period (2004-2005), she was a member of the Management Board of the Electric Power Industry of Serbia (EPS). From 2006 to 2010, she was employed at the Nikola Tesla Airport as an advisor to the General Director for energy efficiency, and from 2010 to 2012, she was an energy advisor to the Prime Minister of the Republic of Srpska, Milorad Dodik. From 2012 to 2014, she was the Governor of Serbia in the EBRD.

She authored and co-authored four books in the field of energy and sustainable development. She has published more than two hundred papers on the problems and possibilities of the Serbian energy sector. She has completed a specialist course in modern anti-corruption methodology, for which she holds a certificate from the Canadian International Development Agency (CIDA).

She is a member of the Management Board of the Development Fund. She is the founder of the NGO Women’s Government, a member of the European Movement in Serbia and the East West Bridge organization. At the end of 2019, she was elected a member of the Council of Employers of the Faculty of Economics, University of Belgrade.